While the 75-year-old visionary felt that the advances combined with humanity’s naturally aggressive instincts would lead destruction by nuclear or biological war, the reality is that the degradation of everyday human performance has already been seen through the advancement of technology.

Computerization of the work place, communication, and everyday tasks is a silent and gradual ‘disease’ that creeps up, but results in a loss of function.
Primarily humans are born symmetrical and have the potential to perform equally well to either side. We are also born to be vertical and balanced around three axis.

For example, in good posture we would stand with our head directly and centrally balanced over the shoulders and spine.
This is challenged on a daily basis through actions such as texting on a mobile phone; sitting on the edge of a chair while working on a laptop, I pad or even staring into the lower than ideal screen. 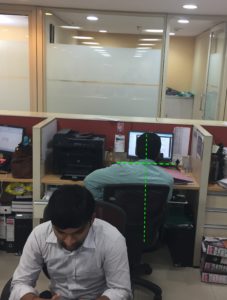 In these positions, we take on what I refer to as a ‘floodlight’ position: our head is tilted forward, creating tension over the shoulder to be anchored at the lower back, and hence ‘pull and tilt’ the hips and pelvis, which can then have negative effects on the rear leg muscles.
This is typically augmented by twisting when people try to multi-task in the one space: The computer is then placed to one side of the desk, leaving an area for documents, and yet another direction for meetings and personal interaction. Add to this a chair that pivots and rotates, and a tendency to sit on the edge of the chair and the natural strength and good posture of the human design is totally destroyed. The ability to maintain full function of the lower back and joints, the stability of the hips and core, and balance that typifies the skeletal structure is all lost.

Such twisted and distorted positions are held for hours at a time. The myth that the skeleton holds the muscle and soft tissue in place is soon disproven as the change in tension results in a semi-permanent structural distortion.

What has this to do with running? Everything!
Running is a non-contact, natural and intended action for humans: we are indeed designed and born to run.
Injuries come from either doing too much too soon – which typically results from over-loading the soft tissue with loads greater than they are currently capable of withstanding. With a normal erect posture and structure, running has a balanced minimal loading, but the simple and everyday example of an office set up given above can result in the tilting of hips.

When then hips tilt, there are several knock-on distortions: The head is then adjusted in order to keep the view of the screen horizontal as determined by the eyes: this results in the spine being bent to support the head.

The tilted hip makes one leg appear to be shorter than the other. This means that one foot has to push more in order to maintain an equal stride length in order to run in a straight line. This alone changes the loading in the muscles, but add in the imbalanced forces from the head, (the heaviest part of the human structure), having been displaced over its natural spine position, and suddenly the whole body is not only skew, but displacing relatively massive and unbalanced loads from one leg to the other when running.

When walking, these displaced loads are relatively small and often go unnoticed until mature years, when the body’s resilience is reduced, but running is a different matter.
We know that the bounding from one leg to the other typically carries three time the bodyweight. However, a distorted structure, like a displaced or lost column in a building, can result in significantly greater loads being directed onto one side, and in an effort to compensate these loads are transferred to a range of joints or soft tissue, but typically results in overloading and hence injury.

As the imbalanced loading will naturally highlight the weak links, runners become injured from these basic postural imbalance. Importantly, the distribution of load means the site of injury is rarely the site of the imbalance. Virtually all injuries have their root source in the level or twist and tilt of the hips and core. If this is out (of alignment) then virtually all peripheral structures can be expected to be affected.

Its not simply sitting how we (typically) travel is like adding a ‘jerry-can’ of petrol to a fire: Here I show that simply pulling a typical trolley bag, but it is usual for it to drag back behind us, causing a rotation or imbalance of force in the hips (twist around the vertical axis). The weight of the bag, length of the ‘drag’ and frequency can also impact on our style, and also result in a short leg syndrome.

Ironic, and frustrating, as injury may be, be very thankful that you are a runner: Those who do not run, are today very probably considerably more imbalanced than you; are unaware of these problems that will catch them up just in time to limit their retirement, (and incur major medical costs). The message for runners is simple: Become aware of your everyday posture – correct it to be as balanced, symmetrical and functional as possible.

Shammi Gupta, a Yoga Therapist and consultant, and I have held office appraisals in Mumbai where we look at the sitting and desk set up of employees, show them the impact of their daily life, and ways of minimizing the impact with a few easy changes, and exercises. Here Shammi, (who is NO relation to the SA Guptas), demonstrates a simple stretch and move while sitting: 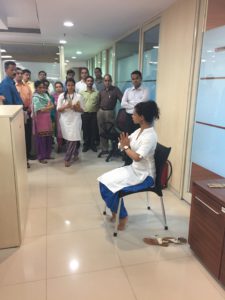 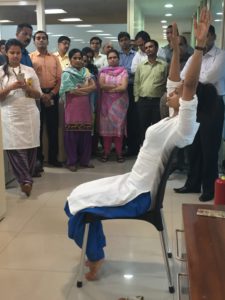 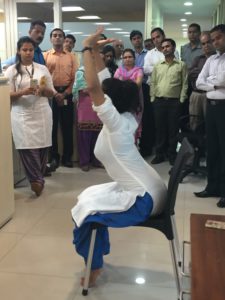 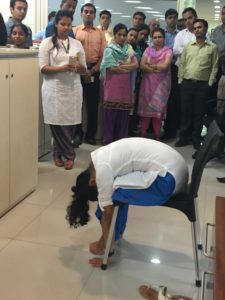 Stephen Hawking is correct with his concern over technology, but the destruction has commenced on a subtle level: – without accident, collision or impact, there is no such thing as a distance running injury – the source, and correction will be in your core, your shoes or your running style!