Mapaseka Makhanye opened nearly one minute on Boxer team mate Lebogang Phalula in the Durban leg of the Totalsports ladies 10km on Sunday to take the line in 34 minutes 30 seconds.
This comes at the end of Makhanye’s peak training as she goes into final preparation for the marathon at the London World Championships which begin on 4 August.
Although a clear winner, there was some disappointment from Makhanye who was hoping to get around one minute faster on the beachfront course, as a marker for London

Listen to Mapaseka talk about the race and her hopes for the World Championships here:

Lebogang Phalula was a clear second with Loveness Madziva third in 36:32. Phalula was offered the opportunity to compete in London Marathon championships but felt that the invite did not provide enough preparation time and opted to rather do more with a view to making a better time over shorter distances and then make the Commonwealth Games team for the marathon.
Phalula has an outside chance of winning the Spar Grand Prix this year, and will rather plan to move up around September with Cape Town Marathon a current option. 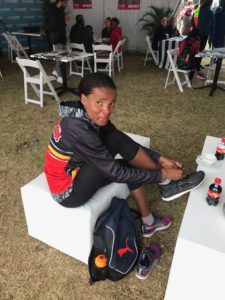 Lebogang, a @Puma athlete, tried out the new lightweight and flexible Netfit shoe, before her first ever ride on an Elliptigo cycle that had her enjoying, the machine that colleague Rene Kalmer has been using both to get over hip surgery and in her comeback after the birth of a child in March.