Conditions took the toll on all performances at the World Athletic championships on Wednesday night with 400m Gold medalist Wayde van Neikerk, scraping through to Thursday’s 200m final as the second and last of the fastest losers.

The South African was untypically the third slowest out of the blocks with American Ameer Webb in pole position coming off the bend and Turkey’s Ramil Guliyev in second, but powering forward to take the lead and cross the line in 20.17.
Van Neikerk dug deep, but ran out of distance to make any further impression to finish in third in 20.28 seconds 0.06 seconds behind Weir. 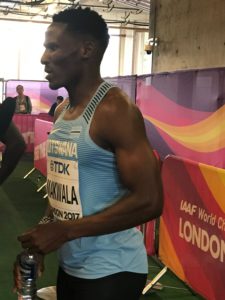 The performance of the night came from Isaac Makwala who ran an impressive 20.14 to finish second behind Isiah Young who recorded the fastest time of the semis in 20.12 and in the process pulling Yohan Blake to 20.19, giving the Jamaican a spot in the final as the first of two fastest losers.

Makwala’s performance came in the most unusual of circumstances.
With around 30 athletes and supporters at one of the official championship hotels going down ill, and two being diagnosed as having the highly contagious Norovirus, Makwala was withdrawn from Monday evenings 200m heats when he vomited at the warm up track.
The IAAF, on the advice of the local Health authorities, put the Botswana star into 48 hour quarantine which also put paid to competing in tuesday’s 400m final.

With the 48 hours completed, Makwala was thrown a life-line, with the opportunity of a lone 200m time trial on Wednesday evening before the start of the official meeting. If he managed to beat the 20.52 time of the slowest qualifier he would be reinstated. 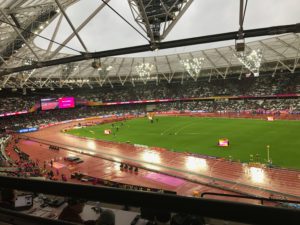 Despite the 14 degree temperatures, and consistent rain a highly motivated Makwala pumped his way to 20.20 seconds to a massive roar of the early bird spectators in the stadium, some of whom stood in ovation to the man from Botswana.
Not suffice with proving his point with his speed, the World Leader dropped and provided some entertainment with the addition of 10 press-ups. Point made!

It was not a good outing for Akani Simbine who was out fast but faded dramatically over the final 40 metres to finish in a 5th place tie with Shota Ilzuka (JPN), and flippo Tortu (ITA).
All three were give 20.62 seconds, but split on the thousands of second to 20.612, 20.613 and 20.618 for simbine respectively.

Neither of the South Africans made comments going through the mixed zone after their events, but later Wayde.

“Todays race was a bit tough, being my 5th race in 5 days. I never expected it to be easy but im glad to have made it through,” said the Bloemfontein athlete.
“(Isaac) deserved to be there since day one, but it was a health precaution they (IAAF) had to take. As an athlete I would have loved him here since the 400m last night.”

It was sentiment echoed by all the other athletes, with Jereem Richards, the winner of the second semi in 20.14, calling it the a ‘show of class.’
Listen to Jareem Richards here:
Upload Music Files – Upload Audio –

With the rain due to cease overnight tomorrow’s 200m final at 22:52, is currently expected to be held in 21 degrees and dry conditions which should see a more fluent race by all finalists.
Given Makwala’s back to back sub 21 sprints tonight, Van Niekerk’s heavy racing schedule, and the change in weather conditions that may well have advantaged some athletes, there is every possibility of the form books being upset, but few will discount the motivation of Makwala to prove a point and balance the books with a podium topping performance.