Usain Bolt – The Puma who Inspires in South Africa

Multiple World Record holder, Usain Bolt, who dominated the 100m and 200m sprints at Olympic and World Championships from 2008 to 2017 ‘sprinted’ through South Africa at the end of January 2018 providing inspiration to future athletes in the School of Speed.

The Puma and IAAF Ambassador had a busy weekend, attending The Met horse racing in Cape Town, a session at Mamelodi Sundowns, and then, after being trapped in a johannesburg traffic jam, went to Puma School of Speed at Ruimsig Stadium.

This video was shown as a highlights pack of The Bolt Legacy tracking his progress from 2002 to 2017. Dedication, hard but slow progress, commitment and focus on a single goal and an equally committed support team saw Bolt, with coach Glen Mills, move to the peak of world athletics.
Records and performances are there to be broken, and beaten, but it is highly unlikely that anyone will improve on the Jamaican’s legacy in the near future. 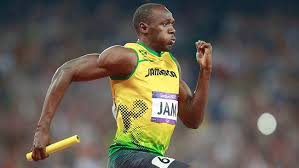 Below are some of the questions thrown out to Usain during his media conference in Ruimsig before the sprinting icon went down to inspire the future stars… There can be little doubt he made his impact before, during and after his visit.
During the day one 16 year old ran 10.3 for the 100m and in the finals a boy ran 20.89 for 200m in a cool windless post rain evening. 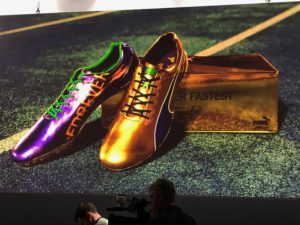 Even sitting watching the video he must have seen many times, Usain’s emotions were evident – why? Will we see a 9.4 second 100m soon?

How did the Puma School of Speed Commence?

Puma’s Brett Bellinger explains how and why the Puma School of Speed works in South Africa:

How has Bolt found his retirement? – He seems quite busy still…

What is Bolt’s Football ambitions?

Bolt’s journey to Icon status was not all smooth going, How did he conquer the challenges and what gave inspiration?

What will it take for someone to break Bolt’s record and match his legacy?https://youtu.be/4k0wxTVyKaY

The question that stumped Usain Bolt, (or was he being diplomatic with ASA President sitting next to him?):
Given the number of sub 10 sprinters emerging in RSA, Were you surprised that RSA didn’t have a 4 x 100m relay squad?

Who would be your top 5 sprinters of all time? and if so would you put yourself at number 1?

Some interesting answers and times from the athletics Icon… sounds like it was more than the kids that got inspiration from Usain Bolt’s whirlwind trip through South Africa and he has promised to assist again in track and field …. watch this space