Run Clockwise to Beat the Clock in Om Die Dam

Old Mutual Om Die dam on Saturday 17 March moves to a new venue, but for the third time is an IAU Gold Label event. It has been a Bronze label for many years but the standard of performance in the event makes this a special event and one of only two Ultramarathons in South Africa obtaining the Gold label status

This means that runners are ranked internationally and can use this race as a qualifier for the world 50km championships or ranking to enter other such events around the world.

These are the IAU national and international standards 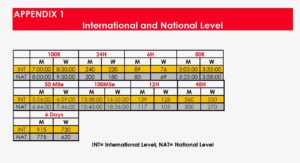 The IAU is the Ultrarunning arm of the IAAF and so the competition is held under IAAF rules.

Go With The Clock, but run against Time!!!

For the first time Om Die Dam will be run Clockwise around the dam which puts Saartjies climb much earlier in the race BUT puts Kommando Nek as a more gradual and longer climb shortly after the marathon mark, and then …. with 2k to go …. the climb your mother forgot to warn you about!!!!

This final climb demands respect so save some energy for that. 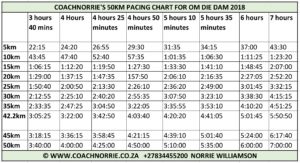 The times given relate to the qualifying seeding times for Comrades Marathon and needless to say there willl also be buses assisting with some of the pacing levels.

Twice over the Dam wall!

Half Marathon runners also face that final climb but first run from the start over the Dam wall into Schoemansville following the first 9km of the 50km before taking waterfront road where they will be within a few metres of the dam water.

It’s then a climb back up into Scott street and for the first time they get a ‘Double Dam Crossing’ as they head back past the brewery to the resort and the finish.

Here are the pacing charts for the 21km race:

It will be seen that significant time is allowed for that final run to the finish line … and for good reason!!

This is the first time the race has been from the Resort but the great news is this will be the home of Om Die Dam for the next years to come.

2018 will be a challenging event not simply because it is a new venue, but due to the road works that are still underway.
this has impacted on the selection of the 10km route which will go out and back to the dam wall, as road works make the preferred alternatives impossible.

Slower than expected progress on the road works also impact on traffic to and from the resort (so get there very early) and the road width for runners. (Beware of the change in levels on the centre of the road)

However as Om Die Dam heads towards its 40th year, the event continues to grow in number status and opportunity….. enjoy the finish with all the catering, refreshments open space, swimming pool, water chutes and facilities … next year will be even bigger … 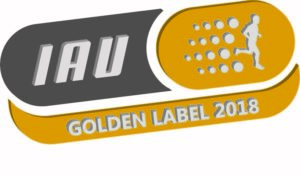