After a period of leading the 2018 down run Comrades, Russian Alexandra Morozova, took third place and at the media conference told stunned journalists that she has yet to be paid 2nd place prize money for 2017 Comrades! 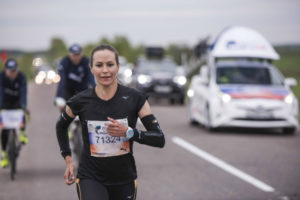 With a critically ill mother, and having given up full time work, in order to train and prepare for Comrades 2018, this Russian runner has been hampered in her bid to assist her mother due to the delay from Comrades 2017 Prize money.

Layman confusion has existed about the eligibility of Morozova in the 2017 Comradses despite IAAF clarifying their rules and calling for the 2017 prizeminey to be paid.

The Russian is NOT affiliated to the Russian athletic federation and is a ‘recreational runner.’ It is therefore impossible for the Russian federation to clear her or provide any sort of letter stating her position.

Logically a person who is NOT a member of an organisation, can not be cleared by that organisation.

Comrades accepted her 2017 entry, and therefore must pay the prize money.

This, confirmed Morozova, was communicated to CMA and ASA months ago, but still the money has not been paid.

Morozova’s situation has not changed for 2018, except that ASA brought in a new rule (9) in January.

The new rule has restrictions on in-coming foreign athletes, requiring each and every one to be a member of a club, AND, affiliated to their national federation, or to face disqualification.

The challenge is that the rest of the world are NOT structured like south africa as only a handful of countries have a similar club structure.

The vast majority of countries allow recreational running which does not require any affiliation and only require the truly top athletes (those making Gold Silver or Bronze label qualification times) to be affiliated.
In the majority of countries being a member of a club is optional and very limited.

This does not match the ASA perception of the structure making the application of the new rule difficult.
The major races seem to be faced with a situation where they either apply the rule and refuse entry from the mass of foreign recreational runners or ignore the rule and face a stand off with the national athletics federation.

The situation and understanding of the IAAF’s suspension of the Russian Federation has only served to confuse matters further in the public domain. It currently appears that a deadlock situation exists between race organisatii and the federation.

With Conrades and Two Oceans each attracting around 2000 foreign runners annually the potential impact of this rule is significant not simply to race entry, but tourism, and the commercial impact and employment in the host province.

Morozova has stated that IAAF have informed her that she is to be paid prize money by Comrades.

Listen to her media interview after finishing 3rd in Comrades 2018

The potential damage to The image of the Comrades, South African running and the country is clear.

CMA said to have delayed payment due to instructions from ASA who have a seat on the CMA board and are the sanctioning body.
Morozova believes ASA are the culprits in the delay.

For years ASA have referred to IAAF 4.2 as a means of demanding international runners to provide a clearance letter when competing in RSA events

This interpretation is incorrect according to the IAAF as it applies to outgoing RSA runners, and the national federation’s ability to require the runners to seek clearance from ASA prior to competing internationally.

In 2018 ASA rule 9 was introduced, as a domestic rule and it is the standing of this domestic rule in international competitions that appears to be the stumbling block.

In 2017 no such rule existed which leaves the delay in Morozova’s Up run 2nd place prize apparently without cause. There are growing calls for this to be made along with a figure of interest for the period of non payment.

It would appear that there is little urgency on this payment, but with a growing number of international events and growing foreign interest in running in South Africa this is not a matter that will fade away.
The next major influx of foreign runners is likely to be September’s Sanlam Capetown marathon, which means the matter is exacerbated with each passing month.

It’s a matter that affects the athletes, the sport and the country and either way one that would seem to require early resolution.

Comrades becomes biggest challenge ever … and No Turning Back!