The South African 100km team left Johannesburg on Tuesday night (4 September) on their way to Croatia for the 2018 World 100km championships.
The flight via Dubai was almost an hour late in landing, but still well in time for their connection through Zagreb, which would be followed by a long bus trip to the race venue.

I caught up with them in Dubai and spoke to 3 time Comrades Champion Bongmusa Mthembu about his chances. The Arthur Ford sponsored athlete held the lead after 85km in the 2016 edition but was overhauled in the final run to the finish. This has shaped his plans for the 2018 race. Japan’s Yamauchi’s winning time of 6:18:22 is unlikely to be broken on the hillier Croatian course, and dont expect Mthembu to be as keen to take the early lead this time around. 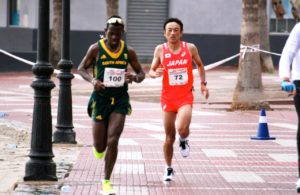 Despite the Comrades being only 2 months ago Mthembu has used his comrades training as a base and spent most of his time sharpening up with short fast capacity building work.

Easy Equities Born 2 Run athlete Salome Cooper, has run 100km before for South Africa and has been named Captain for both men and women’s side. Having broken the 7 hour mark in Comrades, but just being edged out of the Gold medals, this is an opportunity to spearhead the ladies quartet to the podium.

Salome believes although the race is different from Comrades in as much as it is a single 2.5km lap followed by 13 laps of 7.5km, the South African’s can make an impact if they run as a team.

The ladies are all capable of times between 7:55 and 8:15 in good conditions, and like a good game of darts, the team prize will probably go to the country who can put together the most consistent trio.

Last outing saw Australian Kirstin Bull take the honours in 7:34:25 and Croatian Nikolina Sustic, who will benefit from home ground support this year, in second 7:36:10.
The top 5 were all under 7:48, but the hills in this years course provide a glimmer or hope for the South African’s who are more at home on a route that climbs and falls
Salome shares her views HERE
Podcast Hosting – Embed Audio Files –

For team manager, Nick Bester, the strategy is for each individual to run to their ability, but acknowledges that in the case of the women, there is little difference in their standards, which means a podium place for the team is a real possibility.
In the men its a different kettle of fish, and he places both Bongmusa and Claude, who never ran Comrades, as real title contenders, and the team as having a real chance of Gold.
Compared to the 2016 team, the current squad have flown out an extra two days earlier which i believe will make a significant difference to their recovery prior to the grueling challenge of the distance.

Nick is particularly confident about the outcome given that the team have arrived at the final week free of both injury and illness: Listen Here:

Many seem to have forgotten the women’s teams of 1998, 1999 and 2000, who won both team and individual age categories in France and Netherlands.
In those years athletes such as Carol Mercer, Marietjie Montgomery, and Sanet Beukes made their mark on the podium. 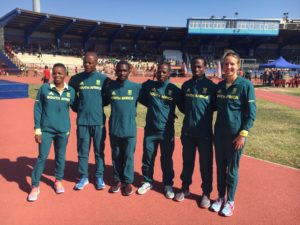 The 2018 quartet of ladies has been selected on the best available, and although the controversial withdrawal of some top Comrades finishers has seen the selection go to outside the Comrades gold medalists this may work in favour of a better team performance. Being so closely ranked the combination of Salome, Fikile, Lisa and Deanne are so closely could well perform better than if the squad comprised of 3 or 4 individuals performers.
Lisa Collet, from up Durban’s North Coast is determined to make the most of the opportunity in what has been a major step up in her running career.
Listen to Lisa HERE:

The team awards are based on the top three finishing times but countries can enter 4 runners in the squad.

This world championship course has a total climb of 60 metres on each of the 13 x 7.5km laps and this will suit the South African’s but as comrades to comrades where in recent years foreign competition has been few and far between, and effectively seen South African’s competing against themselves, (particularly in the women’s field) this is a World Championships with the very best from each of the countries.
Its going to be a hard fought battle.

It is a matter of note that World 100km champions are NOT know to come and win Comrades, BUT equally Comrades winners have yet to go on to dominate the World Championships. That short, determined and dedicated man from outside Pietermaritzburg may well be the runner to change that trend!
This weekend will reveal all…….