A top class field spearheaded by defending champion, Joshua Cheptegei, lines up with 8000 other international, national and local runners for the FNB Durban 10km CitySurfRun on Sunday (14 October) with records and PB’s on their mind.

Last year Cheptegei ran the all-comers fastest time on South African soil and recorded his PB for 10k of 27:29.
The 22 year old Kenyan has a 10000m PB of 26:49.94 from London World Championships, which is 4 seconds from the world 10k road record, but last years Durban time was set with a impactful wind that Swiss national record holder Julien Wanders says slowed him over the final 4km.
Wanders ran 28:12 in 2017, but has since reduced his PB to 28:02 in France, on a course that he feels was slower than Durban. The Swiss athlete says that in good condition he feels capable of breaking Mo Farah’s European record of 27:44 set in central london

Julien Wanders speaks highly of the Durban event and feels it has the makings of a world class event. Certainly it has potential but perhaps the multiple corners between 5km and 7km could be smoothed out as the event grows in status as this may slow progression slightly too much. 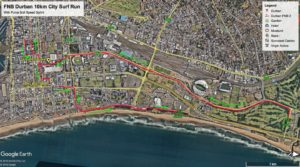 There are many of the top South Africans in the field including Ryan Mpahlelele, Stephen Mokoka and Rantso Mokopane who will be wanting to make their mark, and as Elroy Gelant points out this is the potential new format for South African athletes, and one that will bring out the best in local talent.

The sliding scale of incentive money for South Africans means its not simply the top three that get the rewards … As the athletes performance improves the rewards increase for the five runners who break the target times from 29:30 downwards in 30 second breaks.

The women’s field will be lead by defending champion Mercyline who reduced her PB by over 1 minute in 2017 to take the tape in 31:38 and run the second fastest time ever on SA soil.
The Commonwealth Games Bronze medallist’s defence will be however be severely challenged by the Gold medallist who recently sliced 10 seconds off her road PB to record 31:44. They can both benefit from the inevitable tussle for the top step of the podium.
The South African campaign is sure to respond to having internationals to chase and race.
Glenrose Xaba, Lebo Phalula, Cornelia Joubert, and the versatile Gerda Steyn will be amongst the ladies joining Irvette van Zyl in the chase.
Van Zyl has been improving with each outing in the four months since returning after the birth of her child, and this race could well provide something very special for the Nedbank athlete.
The Durban event is going to bring out the best in SA ladies and see them get back to the sort of levels they are truly capable of.

This sort of fast high quality race will not only bring out the best in the elite but in across all age groups. For the first time the front batch of the race contains age group runners who, based on time criteria from 2017, who can be expected to make the top places and contend for the podium.
This innovative approach ensure free running and the optimum chances for everyone despite the massive field of runners.
Amongst those contending is the age group is 87 year old Deirdre Larkin who will be hoping to improve on her 63 minute time run at altitude in the SA Championships, but even more significant would be to dip under the 59:21 set in the Johnson Crane 10km (CGA championships) in 2017.
By far the most important will be to have the performance officially recognised as many of the others run by this wonder woman have failed on technicalities.

With the course pre validated by IAAF Measurement, and the KZNA officials aware of this attempt, recognition should not be in doubt, but the biggest challenge will be the weather.

The design of the course provided by Durban Authorities is such that a southerly wind will probably blow any record away, as the runners will face it head on for the first 5km into the city.
This configuration also means that attacks on staking a claim for the world 5km Road record which will be established on 31 December based on the fastest ratified time run in 2018, can not be recognised due to the separation, however times at the half way could easily be listed as Best performances.

That said the current light drizzle will maintaining temperatures down with a high of 18, and a predicted dry 16 degree start on Sunday.
It would seem everything is aligned for fast times for all….

No wonder over 7000 runners will line up for the FNB Durban 10k … but if you are running make sure you get there on time.
A travel and parking map has been sent out and it is highly recommended that runners park either on Snell Parade, the Swimming Pool park, Mustering Fields, NMR grounds, or Moses Mabhida Stadium and use the 2km to the start at Blue Lagoon as a warm up. The Promenade finish will then be very convenient after the race….

PLEASE NOTE – IT IS NOT SUGGESTED THAT ANY RUNNER USES NORTHWAY / ATHLONE BRIDGE TO GET TO THE START AS THIS WILL MEAN THEY ARE FORCED TO TURN UP GOBLE ROAD TO UMGENI BEFORE GETTING TO PARKING..

ALSO NOTE THERE WILL BE NO FRONT LOADING FROM NMR AVE (MY AVE) – SO RUNNERS SHOULD APPROACH FROM SNELL PARADE INTO THEIR SEEDING PENS. 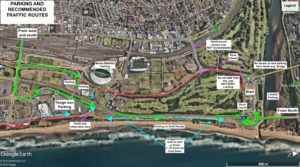