Free Coach Norrie Comrades Pacing Charts – and How to use them!

Profile is read from right to left: This gives the km to go distances (as pacing band does)

This is done by comparing your best performances over distances from a mile to the marathon and from the table you can predict relatively accurately what time you can realistically do in comrades this time using your best 10k and marathon time in the last 9 months.

NOTE: that this year in a great move by Comrades Marathon Association there are two new medals: New Medals mean New Motivations…

ALL MEDAL AND CUT OFF TIMES ARE BASED ON START GUN TO FINISH LINE with no allowance for time taken to cross the mat. 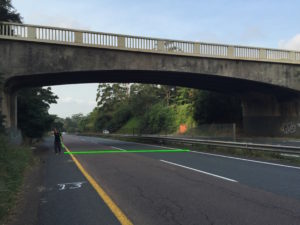 What does the Realistic time mean? Is Realistic Time important?

For those few runners going for a Top Ten medal or a top 3 age group, or one of the team awards, the realistic time is important but for the majority of runners the realistic time is something that purely gives you  a time that you should not go faster than.
In general the idea would be to drop back in your target time to about  5 -15 minutes below the next medal cut off. 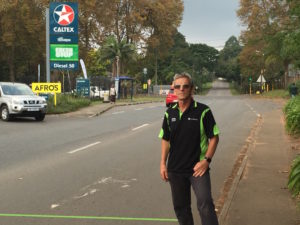 For instance: if your marathon time is 3:50 then your realistic Comrades time is around 9:20. This is too far away from 9 hours to be able to get to a Bill Rowan but you should be safe to earn the new Robert Mtshali – the Bob? For s sub 10 hours.

There is no point in spending the day ‘red lining’ and trying to run at your limit, keeping on pace and on the knife edge of your ability for the 9:20. Rather drop back and target a 09:50 which will give you the same Robert Mtshali medal, but allows you more tolerance in your pacing and to enjoy the day.

Once you are on that ‘Nameless hill’ up to the chicken farms just outside Camperdown and at the dreaded 40 mile (64km) into the race you can assess how you are feeling and then decide if you want to pick up the pace, maintain pace, or even make use of the 10 minute safety margin you have for the final 23km of the race as you have just under half a minute per km in hand and it is significantly downhill for around 12k the remaining distance.

On the other hand there are probably another 1000 runners for whom their realistic time comes about 5 -8 minutes slower than a new medal category.. in other words if they can beat their realistic predicted time by 5-10 minutes they would move from say a 9:05 to an 8:59 finish and this would make the difference of a Bill Rowan or a Robert Mtshali medal. 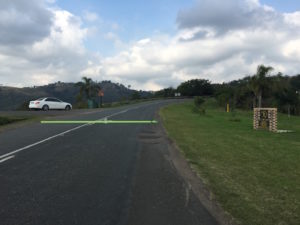 In such a case and assuming good weather on the day, it is worth working towards this better time: BUT – I REPEAT, BUT: these performances are NOT earned in the first 2 /3 or the race, they are earned in the final third and the real keys are:

How to use the pace bands:

From day 1, 24 May 1921, the Comrades was known as a ‘Go as you Please’ event, and there were no formal seconding. Runners ran from hotel or pub or store to the next point of assistance along the route.

There were no mile or km markers it was all about the distribution of energy for a certain section of the route and then stopping for fluid and food at those landmarks along the route. 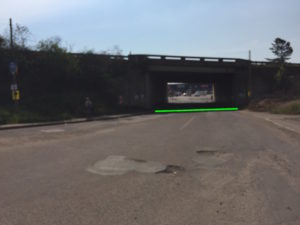 It was only in the 1970’s that km marks were brought to the race and in the first year it was at 5km intervals BUT for ONLY the last 25 km.

There were no GPS or watches that would give indication of pace – instead it was done on ‘Feel” or effort. The basic concept of ultra running on a hilly course remains the same and it is vital that runners learn the feel of what they can do. Hence the go as you please:

While Wally Hayward was the first man to break 6 hours on the down run, he would not be running 4 minutes per km for 90km:

This, particularly early on, gives a great means of assessing your pace and preventing you from ruining your race by going out too fast.

Note for instance: that there is only 1 minute 40 seconds difference in the time that an 08:30 finisher and a 09:00 hour finisher needs to arrive at Tollgate BUT being that 100 seconds too fast implies that you are capable of a 30-minute faster finish time.

Put another way:  If you start off and, because it feels such a slow pace, you arrive at Tollgate a mere 100 seconds too fast, it is the equivalent of saying that your personal best is not 3:43 Marathon, but rather a 3:30 marathon. Or that instead of only being capable of a 47-minute 10k, you are capable of a 44 minute 20 seconds 10km.

From this it is very easy to see how critical it is for you to ensure you are not too fast early on – HOWEVER the point is that over this early 4k and 8km distances it is just so very easy to be running too fast and to arrive at Tollgate 100 seconds too fast.. If you do your race is basically over! – not in the first 50k or 60k but by 65km and the final 25 will be slow and painful. 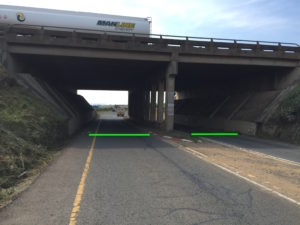 In using the pacing bands use the one band to target the time,  and use the faster and slower time bands to make sure you are definitely not going too fast and the slower time as a means of keeping you just inside the target.

Comrades forces back runners to race harder than the winners!

This post has been delayed as it was ‘rumoured’ that the race organisers were accepting advice to change the intermediate cut off times which are too tight to let any 12 hour runner complete the race in a  ‘normal’ pacing approach:

Unfortunately, this has not happened and ALL runners who logically could finish between 11:30 to 12:00 are affected by these unreasonable cut off times, particularly at St Johns Road, Winston Park, Half way and Cato Ridge: 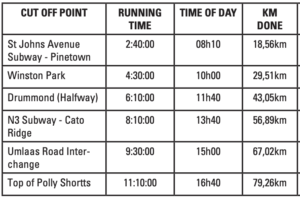 NOTE: The above table are the cut-off’s dictated by the Race Organiser as listed in the final instructions mailed on 2 June 2019. Compare to pacing charts for 11:00, 11:30 and 12 hours to appreciate the insanity / unfairness of these intermediate cuts IF the race is, as it was intended by Vic Clapham, about the runners.

But it gets worse:

The above comment is made on ‘normal’ pacing assuming a runner is able to  run  ‘freely’ as they would wish from standing on the start line when the start gun is fired:  This  of course, is NOT the case

In short the RACE ORGANISERS have made it considerably more difficult for any  runner who would logically targets an 11:30  finish, and in fact puts in  FOUR major hurdles, that require the runner to run illogically faster over the course – from the very beginning of the race!

In effect these runners are forced: not by the history, not by the intent of the race founder, not by tradition, but by the race organiser’s ridiculous adoption of intermediate times, and lack of appreciation of the running situation to run with a positive split – They are FORCED to Run faster to half  way then slow in the second half!

THE ONLY POSSIBLE SAVING GRACE IS THAT A NOTE  SAYS THESE CAN BE CHANGED:

This is what the 2019 runners have to live with it for the UP run so the following is the advice on how to use the charts to get around these unreasonable cut off times.

The following table confirms the above observations based on the the 2017 up run- but remember the entries then were 4000 less, and ANY extra numbers on the Comrades route are now making things worse with each additional runner. 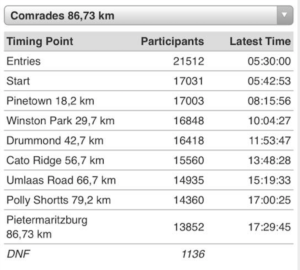 Allowing for runners who for other reasons may not have been able to make it along the route (1136 are listed as DNF) then it  is around 2000 runners that have been taken out by the intermediate cut off points!!!!

Is there no learning points for the Race Organisers in the 2017 figures?

It is ABSOLUTELY USELESS extending the cut  off times on the day — by the time the runner has reached the first cut off which he targeted on the stated time, he has blown the pacing and is already over-extended!!!

Unfortunately for around 2000 (and more this year) who have worked and deserve to finish their comrades medal will be deprived (yet again) by the stubborn attitudes of Comrades Marathon organisers.

As a coach I can only advise on how best to try to  work around this insanity.

Vic Clapham will be turning –no spinning! – in his grave with this attitude !!!!

As indicated above, and emphasised here, those runners targeting finishes in less than 11 hours 30 minutes should NOT try to make up the time taken to cross the start line in the first 35km. This puts too much effort in the hills which will result is an inability to run well in the last part of the race from Umlaas Road to the finish.

However, those targeting the 11:30 to 12 hour cut off, have NO OPTION but to make up the 8-11 minutes that it will take to cross the start line, and need to be running faster than the given pace to reach The St John Road Underpass cut off in 2 hours 40 minutes.

The FACT is that to reach this point in 2 hours 40 minutes, assuming you are ON THE START LINE requires you to run at the 11:30 pacing plan.  BUT you are NOT on the start line and more probably 8 minutes behind the gun.

So a 12 hour runner, needs to follow the  11 Hours schedule through to Pinetown, then continue on that schedule until the Caltex Garage at Winston Park!

Yes, it’s truly that bad, the organisers (in their wisdom?) are forcing 12 hour runners to run on a race schedule that is 1 hour faster than the runners ability!!

In Marathon terms, Race Organisers, are demanding that 4:50 marathon runners, start the first 30km of Comrades as though they are 4:30 marathon runners….. This is why it is ridiculous and no other race organisation in the World would allow, expect, or condone such an approach!!!

From there you can back off a bit to drop to a pace that is roughly a 11:30 schedule and slow even more to make the 8 hours 10 minutes at Cato Ridge.

Taking this approach is fine, Except, somewhere between Cato Ridge and Umlaas Road that early sprint up Tollgate, up 45th, and up the long slow poison to Westville and Cowies Hill is going to catch you up, and then it’s a walk run battle to make top of Polly’s and onto Scottsville!

Unfortunately you have NO OPTION, but to adopt this tactic, and in those last 20km I am sure runners can mull over the words they wish to share with the race organisers for their over-ambitious cut off in Pinetown. 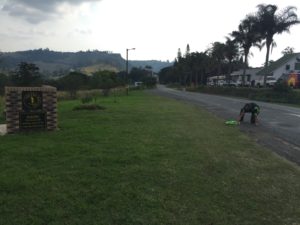 THE PACING BANDS FOR THE MEDAL CUT OFFS 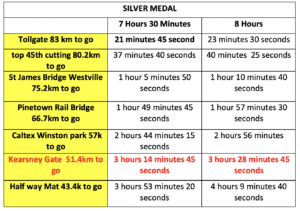 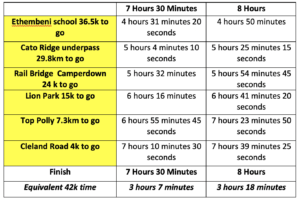 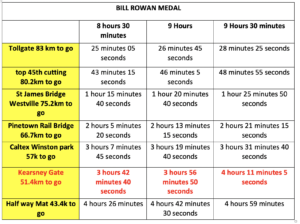 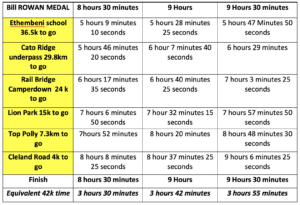 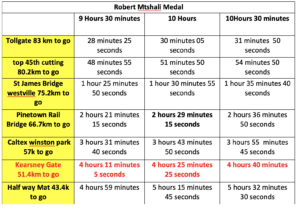 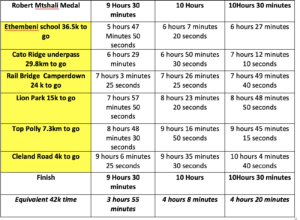 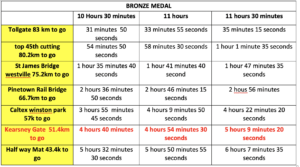 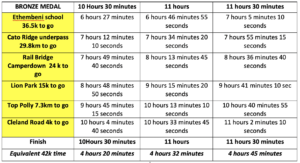 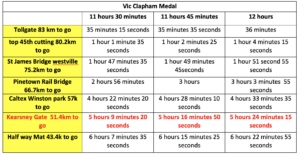 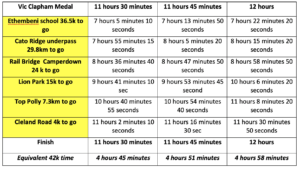