This past week has been a spectacular one for athletics, endurance and the world in general.

It is NOT about the 2 hour marathon – that is still to be broken – this was about proving beyond question that our limit is not set by physical ability but rather it has been ‘limited’ by adherence to signals from our brain – by our perception – NOT by reality.

In the days building up to Saturday 12 October 08:15 (and 10:14 am) there are many who dismissed the event as a novelty: as a manipulation: as a distortion of athletics or even as a marketing gimmick……..  Unfortunately this probably said more about those ‘critics’ than the volumes his success in running for that distance – for that time – at that speed does:

ITS’ ABOUT THE PERFORMANCE – THEN THE ATHLETE:

In 1999 I spent a week in Houston Texas with Carl Lewis as a group leader.  During a presentation he said the ‘star’ is the performance.  Only then the athlete, the coach the support etc..

The Vienna Performance was about the ability of a human to defeat the natural inbuilt protection of the physical body for 2 hours: To go beyond the limits in a sustained manner that was the Star Performance.  The star performer was Eluid Kipchoge. Over time IMO the true achievement of that performance will be acknowledged not only in the sports world, but as a new opportunity in human progression. 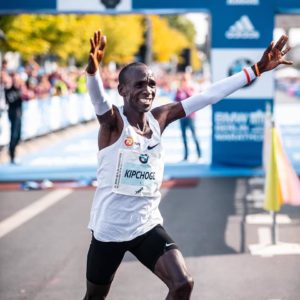 HOW GOOD WAS THIS RUN?

To put some perspective to the performance his 1:59:40.2 (normally rounded to 1:59:41) using normal physical tables relating distances, this time would be equivalent to running a 10km in less than 26 minutes. The world best at 10km on the road is 26:44 –

These are signals that Eluid’s performance was something more than simply a physical improvement was happening.

HOW MANIPULATED WAS THIS EVENT?

In athletic terms, there were just TWO manipulations to the IAAF standards for racing – a) the use of pacers who are allowed to swap over and b) the runner was being fed directly from a moving bike as and when he wanted it. 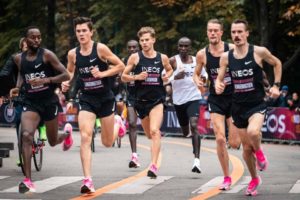 That aside the course was legal with starts and finish virtually zero separation, and with negligible height difference.

The course was measured on the shortest route taken on the ideal route line between the yellow guide lines.

Then there were no competitors as such, and the date and time were variable and finally selected based on conditions:

Key to this however is:

WAS THERE A PRECEDENT ?

One could debate the similarity and differences with the Bannister 4 minute mile.

Bannister had friends pace the mile and the winner had already been determined, so one could argue that there were no competitors in that race.

The race date and time were selected and ‘manipulated’ / determined by predicted weather.

There was no need for seconding / assistance over that distance so hard to compare on this aspect, but we need to acknowledge the Ifley Mile was a ‘scripted’ performance with everyone playing their part, and one predetermined outcome.

Effectively it was the pacing and the seconding ONLY that differed from a record attempt.

In both instances we are talking about challenging perceived human barriers, and both have proved that when the runner learns to block – or has the desire / need / determination, or reason to override the physical signals to slow down then they can move beyond normal levels, and take the barriers away.

Bekele’s sudden ability to run a 2;01;41 is probably inspired by the acknowledgement that 2:01 is possible, thanks to the Sub 2 and the official world record of Kipchoge.

It was the same with Bannister which saw around 9 athletes break 4 minute miles in the first 3 months after Bannister proved it was possible! 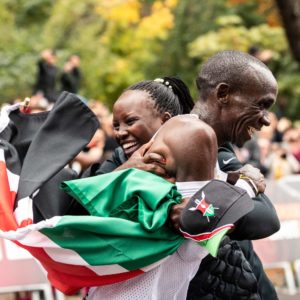 What will Kipchoges sub 2 inspire has yet to be seen, but it could well have impacted on the Chicago women’s race where Brigid Kosgei went out for the record and was legally paced by 2 males for the whole way. 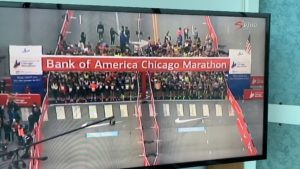 Her world best of 1:04:28 on the assisted Great North Run route was also  a world best at 10 miles and 20km, albeit on an assisted course.

(the drop on the course is outside the allowable)

This was the indication of a 2;15 or 2;16 time, but could the inspiration of Kipchoge have given her the self-belief to have achieved a 2:14:04?

It will take time to find out – but I suspect we will find a link between the sub 2 and Brigid’s womens record – a message – a whats app – a phone call or simply just watching the Vienna performance..

Vienna is a stepping stone … Now that it’s achieved in Vienna, runners’ believe that it’s possible and then it will be converted into firstly a new world record and secondly a sub 2 on a legal with normal conditions
HOW OFTEN CAN IT BE DONE?
The real question will be does Kipchoge have sufficient reserve of desire / need / drive to achieve this because (he is hardly needy in tangible terms) it is that NEED that allows him to block out the normal signals of fatigue that slows us down.

How many times and how much reserve does he have to repeat this ? 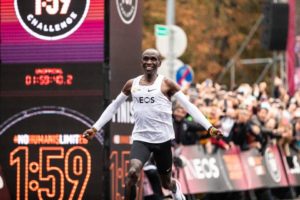 The real achievement today was the performance and proof (to everyone ) that it’s possible to overcome the physiological signals of fatigue by having the desire / determination to achieve a goal.

There are critics who point out that this is all a publicity stunt and only about money.

Of course the commercial rewards are important for sponsors, the event organisers and every organisation involved. Yes the athlete needs ample reward but lets face it Kipchoge with his marathon history is not a poor man in Kenyan or world terms. Would more be useful and was there major incentive money at stake? – A resounding YES

But when you already have a comfortable investment, you  are not using the motivation of ‘money’ to take you beyond the psychological barriers into new physiological territory. This requires something much deeper and with greater drive, that can be held maintained and is important enough to keep the focus for just under 2 hours…..

Physically we work in a factor of safety controlled / protected by the mind – when absolutely required we can go into that zone, by over-riding the normal control setting. The ‘need’ must outweigh the negatives, signals, pain – it’s a judgment call which is why the belief that it can be done must exist inside, and the need for doing it must be ‘wholesome’ to that individual.

Kipchoge has shown that is possible over a sustained time – not simply in an explosive /short term situation. (Such as a mother lifting a car to save her son where emotion overrides logic)

That he has gone beyond normal physical limits is clear because this performance equates physically to a sub 25:30 for 10k 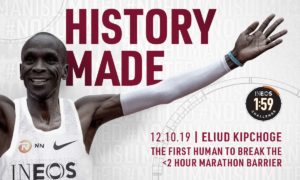 It’s a lesson everyone can adopt and adapt to their own situations, goals and directions in sport as well as everyday living.
WHATS NEXT? – HOW BIG IS THE RESERVE?
Kipchoge IMO will defend his OLYMPIC title then do the legal sub 2.

There is no question that breaching the normal thermostat both reduces the in-built factor of safety of the mechanics (physical) but also requires mental tenacity.

This is where science is going to have to extrapolate the prediction;

The drive into the physical is perhaps like over-revving an engine – going into the red zone on a rev counter:  How many times and how deep into that zone can you go before the engine explodes?

But the mental exploration is more interesting in many ways:

The latter is clearly the more exciting and would fit  a normal training model: we edge outside the envelope and the brain adapts  to the slight increase in stress allowing us to repeat the same task more easily the next time.

But the  questions then remain – what is the limit? – if we can train the mind to overcome the signals then at what point do we over stress / use the body? At some point the basic mechanics of the joints must have a limit. Will the brain allow us to reach that limit, or how close to that limit can we get?

Everything I have currently seen suggests that the brain has a self protective role on the body and more importantly itself:  Like a laptop even if everything else lacks the power and shuts down the basic CPU is kept alive.

Reverse that for clarity: when power is dying  the CPU closes everything else down so that it can survive:

If this is the case then chances are that we have quite a considerable improvement in performances ahead.

If, as in the first analogy, we require to delve into a particular resource of emotion /drive to trick the brain to get past the natural thermostat then there is a good chance that we are only able to achieve such ‘tricks’ a few times in our lives.

Kipchoge is the man who knows what works for him, and each individual is likely to have their own triggers, based on their own journey through life at that time. 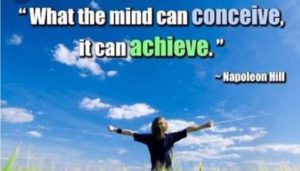 It was interesting to hear that  Kipchoge is quoted as saying that sometimes he smiles when he is in pain: This is well worthy of trial by anyone and everyone:

If when the body is telling you something serious but by adopting a physical contradiction that reflects the  opposing indication it is probable that we trick the mind away from the negative and to the positive:

Smiling during  hard effort or pain is total opposition to the  expected reaction:

Similarly as easy self-test for any runner is to start an event hard: it is common for us to start telling ourselves why  we cant achieve our desired goal / task (too little sleep, too much wine, a sniffle etc)  It’s a barrage of excuses that we try to justify our reduction in effort: if you then repeat – even speak – ‘always expect something wonderful to happen’ – you fill your conscious mind with a positive thought that removes and overcomes the subconscious signals..

As this massive barrier cracking performance is analysed not only will it become more appreciated for what it is:

This was of course a massive physical barrier – but one built around convenient marketable figures – 2 hours and a marathon – it was a man-perceived barrier.

The real “star performance’ was that a man had shown that he could access the physical abilities  beyond the normal mental barriers…  that there is a whole new level of working.

Furthermore, the way in which he jumped, ran and celebrated after the line, (unlike the collapsed Roger Bannister) was clear indication that a)more is possible and b) doing this is not immediately damaging. 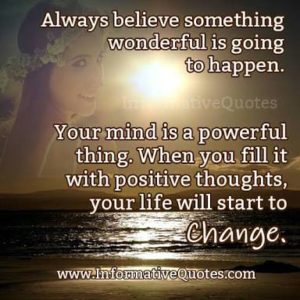 Kipchoge has unlocked a new door in life …..

No Human Is Limited